We use Octopus Deploy for a lot of our deployments. It has great primitives that help us create simple, reliable, repeatable deployment processes.

If you are using it to deploy code onto machines you typically use the supplied agent, installed on your machine. Octopus calls this agent a Tentacle, naturally. The Tentacle registers itself with the API on the Octopus server. Your machine will define which roles it would like to perform and these roles can be used to define which deployment steps will run for that machine.

There is an issue with this registration approach however. In order to be able to register, the Tentacle needs an API key. You can scope that API key to an Environment like Test, Prod etc but not, as far as I can tell, to a role. Therefore the tentacle can ask to be any role it likes. Even if you could restrict the API key to a role, managing the keys and their scopes would be a nightmare.

So how do we get around this. Well, we wanted to eliminate the reliance on the machine telling us what role it should be. Our machines are in AWS and we can use EC2 Tags to add metadata to our machines. So we added an OctopusRole tag when AWS creates the machine (EC2 instance) with the name of the role(s) intended to be used by that machine. You can also add OctopusMachinePolicy if you want.

Then when we want to register the machine on startup, we remove the need for access to the API by instead publishing an SNS message that simply has the EC2 Instance Id and any other useful information like the Tentacle thumbprint.

This SNS message triggers a Lambda which uses the EC2 APIs to query the metadata for the instance. The lambda then registers with Octopus on behalf of the instance. Octopus will subsequently reach out to the machine to establish the connection to the listening Tentacle agent. 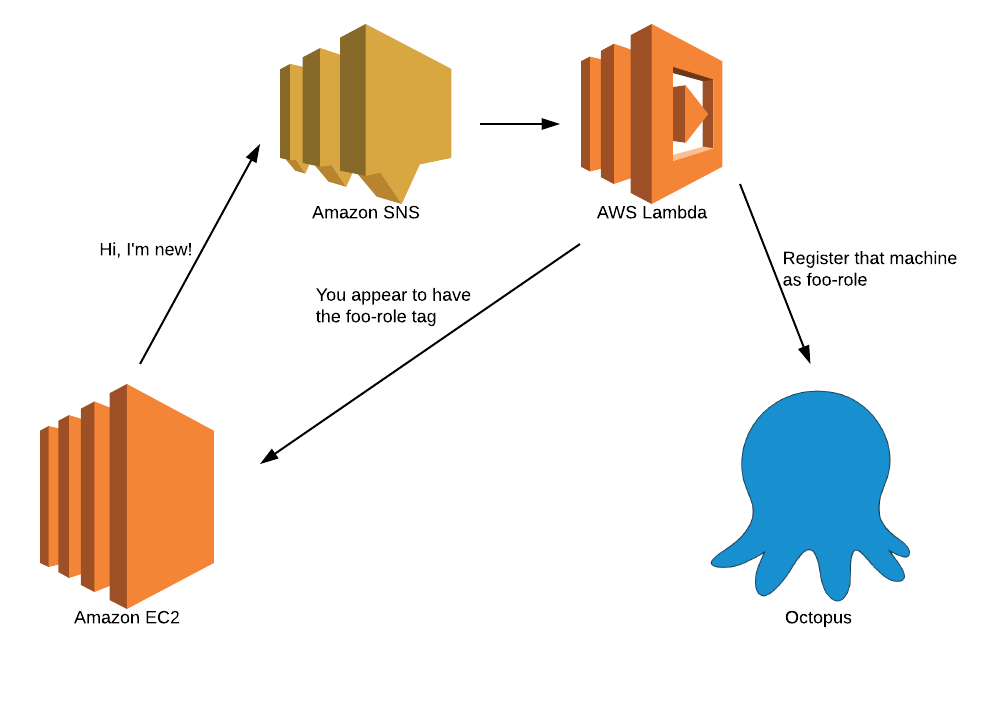 What did we learn?

Basically validate your client inputs. They can lie like terrible lying things.

Lambda is great piece of glue you can use to solve these types of problems. Now you can even write them in Powershell should you so desire. Personally I write most of mine in Python but you can choose your poison without needing to change this pattern.