TLDR; The Nokia has a much better, brighter screen which means easier typing, much better camera, twice the storage but it’s still a big ass-phone.

When Windows Phone 8 was announced I knew I would be buying a device as soon as they came out. The LG Optimus 7 that I got as a PDC gift when Windows Phone 7 came out was starting to show its age although it had lasted me well (with no screen scratches I might add).

When I was considering which of the two flagship phones to get I always had the feeling from looking at the specs that the Nokia was just a big-ass phone, too big to be practical. This was confirmed when a colleague returned with the Nokia 920 from the Build conference. So I put in my order for an HTC 8x.

I had the 8x happily for 2 months and everything was good, people would ask me about it and much preferred the sleek and light 8x to the 920. Then one day I noticed a scratch, not a huge scratch but a scratch none-the-less. I complained to HTC who said take it back to the retailer and they said, well they didn’t say anything actually, they didn’t reply to my email. A few days later I picked up the 8x after setting it down 10 minutes earlier and the screen wouldn’t turn on, it wouldn’t charge and the reset key combination did nothing. This time the retailer did reply and arranged for it to be sent back to them at their expense.

As a result of this I borrowed the previously mentioned 920 from the office for a period of 7 weeks while my 8x was being “repaired” and eventually replaced (only when I pressed them for a status). I would say at this point to beware of buying parallel imported phone from overseas companies like Expansys but the thing is 3 of us at the office bought new HTC WP8 phones. The other two guys bought 8s’s, one smashed the screen from a 2 foot drop onto a soft floor, the other cracked the full length of the screen from having it in a backpack on his back. Neither of them were able to get replacements or repairs any faster and they both bought from carriers (in fact one guy switched to the Nokia 820 in disgust).

Anyways, that wasn’t the point of this post. I was fully expecting to hate the 920, I thought I was going to have to reinforce my trouser pockets, start wearing braces and use two hands to operate it. Not so it would seem. In fact I grew to rather like it.

The first thing I noticed was the keyboard, I had constantly been making typing mistakes on the 8x, The most annoying of which seemed to have been accidentally hitting space which creates a new word and turns the first part of the word into a random auto-corrected bunch of gibberish. No more. The extra 0.2” screen width on the 920 meant that the keys weren’t quite as small and I made less mistakes.

As time passed I started to get used to the extra weight and bulk. The next thing I noticed was the camera. The shots I was taking now were far superior to the 8x, especially video.

7 weeks passed and I got my 8x back. Sitting the two side by side it was easy to see the screen difference. The 920 has a much brighter screen, far superior contrast and those on-screen-keyboard keys were noticeably bigger.

I was a little torn for a few minutes but the 8x is so light and slim compared to the 920. The specs don’t really show it but in the hand, it is a much more comfortable device. In the pocket it is really noticeable, with the 8x I always have to tap my pocket to check if I’ve got my phone on me, with the 920 I can just feel it. Constantly. 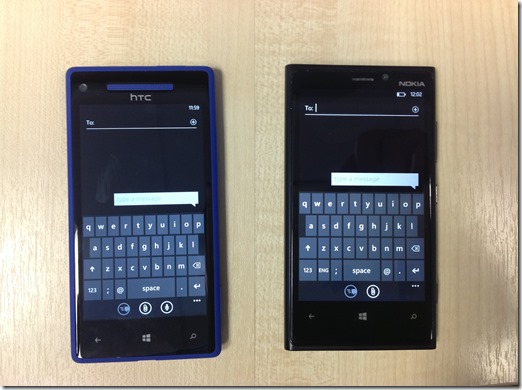